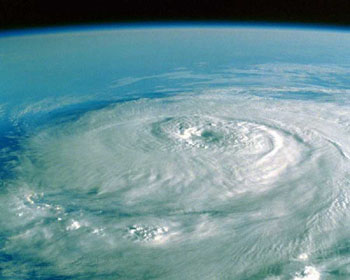 One of the most dramatic, damaging, and potentially deadly events that occur in this country is a hurricane.

Hurricanes are products of the tropical ocean and atmosphere. Powered by heat from the sea, they are steered erratically by the easterly trade winds and the temperate westerly winds, as well as by their own energy. As they move ashore, they bring with them a storm surge of ocean water along the coastline, high winds, tornadoes, torrential rains, and flooding.

Each year on average, ten tropical storms develop over the Atlantic Ocean, Caribbean Sea, or Gulf of Mexico. About six of these typically strengthen enough to become hurricanes. Many of these remain over the ocean with little or no impact on the continental United States. However, about five hurricanes strike the United States coastline every three years. Of these five, two will be major hurricanes measuring a category 3 or higher (defined as having winds above 111 miles per hour) on the Saffir-Simpson Scale. These storms can end up costing our nation millions, if not billions, of dollars in damages.

During a hurricane, homes, businesses, public buildings, and infrastructure may be damaged or destroyed by many different storm hazards. Debris can break windows and doors, allowing high winds and rain inside the home. In extreme storms (such as Hurricanes Hugo, Andrew and Katrina), the force of the wind alone can cause tremendous devastation, as trees and power lines topple and weak elements of homes and buildings fail. Roads and bridges can be washed away and homes saturated by flooding. Destructive tornadoes can also be present well away from the storms center during landfall. Yet, storm surge alone poses the highest threat to life and destruction in many coastal areas throughout the United States and territories. And these threats are not limited to the coastline - they can extend hundreds of miles inland, under the right conditions.

Familiarize yourself with these terms to help identify a hurricane hazard:

To prepare for a hurricane, you should take the following measures:

If a hurricane is likely in your area, you should:

You should evacuate under the following conditions:

If you are unable to evacuate, go to your safe room. If you do not have one, follow these guidelines: